It’s not just jumping on the bandwagon when it comes to the #mynameis movement sweeping Facebook with drag performers and other people trying to use pseudonyms on social media. No! Facebook has been cheating our community for a long time.

Queer Burners on Facebook has had a Page for as many years as it has existed. The Admin followed the rules and created a Page associated with a personal profile so there was a solid chain and a solid respect for their policies.

So the potential of something new and better is exciting. Something more in line with our burner ideology (10 Principles) than corporate greed makes something like Ello.Co [link] look very sexy.

What is Ello doing? 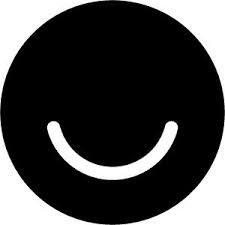 We currently hold the i.d. @queerburers on Ello but unless you are invited you cannot see that that means. Ello is by invitation only and is officially in Beta mode but between burners and the fae community battling the #mynameis movement the roles are being flooded with networked  artsy types.

Ello is a simple social networking mechanism with a User Interface that is basic and nothing like Facebook… NOTHING. It’s almost like Tumblr at this stage without the fancy dress. There is a whole list of ideas coming and hitting the site regularly. Ello is the new darling of social networking; not social ad placement networking. 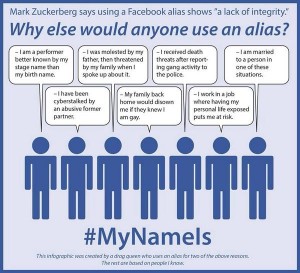 The #mynameis campain [link]  is creating a crater or Facebook who snubbed queer royalty (Sister Roma Roma of the Sisters of Perpetual Indulgence) and others who represent voices of the community. Our Queer Community and voices of people who seek anonymity on the web.

Mark Zuckerberg called it “integrity” while the real bottom line is his ability to shove ads at subscribers and gouge for fees as noted above. Thank you pious white mail heterosexual established and entitled.

The End is Nigh

While AOL, Friendster, mySpace and others never thought their day would come their reality is a distant memory for most. AnyBeat.Com almost made something happen many burners remember. Tribe.Net still holds some distant fond memories but has since been bought out by Cisco and was essentially mothballed.

Yet, right now everyone is looking at Ello.Co as a fresh platform with no ads and a fairly liberal platform that really is – so far – conducive to burner thinking as well as fae.

This last weekend this burner joined a celebration being held by another community that I have been told is very similar to queer burners. It is very likely some of the original people who brought us Burning Man were Faeries; or better known as Radical Faeries.

They too started off in San Francisco and sought land outside the city for the expansion of their mission that would, after many years, still be a hub of joy and liberation for many. While we have the Black Rock Desert, the Faeries earliest property purchased under their church was called Wolf Creek Sanctuary up in Oregon. Now they have several properties all over the world that celebrate their uniqueness.

Within our Burner community we do have a core of Queer Burners that are also Faeries and marry the two worlds almost seamlessly. San Francisco based Comfort & Joy are mostly members of the Radical Faery community with their amazing play on gender identity and radical self-expression.

One of the first things I heard someone say at the gathering, independent of the knowledge of my Burning Man present, was how much Radical Faeries value Self-Reliance. It’s not a unique factor in the world, but my mind immediately went to one of the 10 Principles: Radical Self-Reliance.

On the chores board I saw MOOP (Matter Out Of Place) as the top item on the page and again I saw something else that came from the Burner world. We know many Radical Faery-Burner people have been on Wolf Creek and the influence is there. It goes both ways.

The recent screening of James Broughton’s “Big Joy” (link broken) movie was all about Radical Self Expression and was featured at the Frameline film festival recently and San Francisco faeries took loving ownership of making sure people all over the world knew of this film. Seeing it at this Faery gathering was amazing.

While visiting Wolf Creek there were 2 people present who ever attended Burning Man including myself, but the influences are fairly evident and acknowledged by many members. Consider that just more than a year ago the president of their parent organization (Nomenus) was a burner.

As similar as the worlds are there are differences in philosophies more than basic principles. Many faeries are fairly witchy or hold to some spiritual ideals that reach well beyond what many burners hold on to, but that is not an absolute.

The largest difference, based on this particular experience, is that there is a significantly reduced focus on the party. Though the event I went to was a requested sober event, there were some (self included) that indulged. Chemical stimulants were no where on the property; it was much lower key than most burner occasions.

These really are apples and pears in they way they compare. Both are fruit, sweet and tasty, but the sensitivity and pulse of the community runs on different blood types.

The writer has been hanging out with Faeries for almost 2 years on a very part time basis getting more and more involved over the last year. This year started off with Faery celebrations like Saturnella, Beltane and most recently the SGRF (Spiritual Gathering for Radical Faeries).

The touching part of each of these communities is how closely knit many of the participants are and how much love of the environment and their spiritual siblings.

More from Toaster on his personal blog

While at Burning Man and since I have had the pleasure… no “pleasure” does not even describe… bliss of meeting members of the site in all corners. Sometimes in some surprising places.

The site and our Facebook page is really busy and it goes far beyond the numbers of registered users at each location.

August is ‘shockingly’ a busy month for Burners. The facebook page in August had 100,000 freaking views!!!!! I was awestruck when I saw that information. The web site had 5,200 visitors 3,600 of which never saw the site before!

Of course in September the numbers dropped more dramatically on the Facebook to 23,500 for September, but that is nothing to sneeze at. Web site 3,160 views with 2,690 new visitors; at least according to Analytics and Insights.

Why is this important?
This is not a pat on the back for me. NO! Sounds like it maybe, but when I meet people who tell me they appreciate this site and the links/info on it I want you to see it’s relevance to us as a whole. Each one of you are a cell to a body and that body is part of a collective community and we all are so strong together irregardless of gender identity, race, orientation or social status. This site is a gift to you from each other.

On the site…
There are a few very relevant articles on the site right now I want people to take a look at when you get the chance. The last two major postings were themed with the 10 principles:

There is more. There seems to be a natural link between Queer Burners and the Radical Faeriecollective and the site will put it’s toe into that. Would love your feedback. A couple members are going to be talking about that more moving forward.

New Security
I am working on trying to find the best solution for protecting the site from Spam postings. Most of which you all never see because I have filters protecting the integrity of the site. If you have problems let me know. Too many bad attempts at logging in will lock you out. So, if 3 times you try and can’t get in use the reset feature.

Getting Traction!
I am looking for suggestions on what you want to see this site do. If you are a PHP guru and can help develop some ideas in the form of widgets for a WordPress site like this please let me know.

The guys that made the interactive maps that were unveiled this year like burnermap on Facebook and the one on BurningMan[dot]Com … I talked to both hopefully putting a bug in their ear for widgets or something for sites like ours that would benefit.

Closing
Thank you all so much for being a part of this. I will be posting this on the site as  an article for those not receiving email. About 1/3 of you are not getting email from the site. I would also like to thankComfort and Joy for their amazing support.

We also have a new domain pointing to the site and all new art! We have www.queerburners.com pointing to www.gayburners.com … after all we’re all queer.

Love&Light to you all…
Toaster aka Scott

Increasingly since this site was put together he subject of Radical Faeries has been injected into some of the discussions and even hold a couple places here on gayburners.com in the Groups section [Radical Faeries in Groups]. There is some thought that these are two worlds that can fit together.

There is an influence in San Francisco among such legendary camps as Comfort & Joy that operate  under the RF flag. Many of the key leaders in that camp these days are also leaders in that community.

Kyle and Kitten will probably be the main people injecting some content here from the RF part of the community. They will talk a little more about the marriage of these two groups as time progresses. Certainly their web site www.playajoy.com has links and resources that could be very valuable.

What is a Radical Faerie?

There is a hesitation to define that here, but the description on the group now was borrowed. So borrowing once more:

“Generally, we tend to be gay men who look for a spiritual dimension to our sexuality;many of us are healers of one kind or another.

Our shared values include feminism, respect for the Earth, and individual responsiblity rather than hierarchy. Many of us are Pagan (nature-based religion).

Our defining events are Faerie Gatherings, where we’ll get together for an extended retreat, usually in the woods, separated from the outside world. A lot of that time is spent in “heart circles,” where we open up emotionally.

Of course, that’s just this circle’s attempt at a definition.” – radfae.org

How does this tie to the Burners? Well – hello! It sounds like a trip to Burning Man in this quote alone. As time progresses more information will come, but the core of this site is BURNING MAN! QUEERS AT BURNING MAN or ….or…. living the life of a Burner by the 10 principles.

The posts in this forum may contain opinions or information that is not officially sanctioned by Queerburners. This is not a channel owned or associated with Burning Man. The Blog is a community page and members can post that are not in violation of our principles or the 10 Principles.

Past Posts by Month & Year

All Of Us 2018 at Saratoga Springs

At All Of Us 2017 at Saratoga Springs