I wrote a somewhat cutting piece last week about the Gayborhood / Rainbow Road about what I witnessed and I tried to convey a sentiment from myself and the voices of people around me. What I discovered there is a huge leap from what people will say, what they will speak up for and what they will take action for.

There is an inherit danger to writing a piece the is critical of an institution that has unlimited power on your experience at an event that you might hold dear. In spite of a lot of work, commitment and bridge building that one leap of faith can result in a pretty messy splatter. A part of my leadership standard has been to take chances.

The responses on Facebook opened the door for several things.

There were 2 conversations on the Facebook PAGE and the Facebook GROUP. Both of which were very powerful and eye-opening. This project (Queer Burners) is a community driven project. My opinions do not represent all queer burners and I  try and stay away from giving that position.

Alas, this post. I lit a torch to carry forward and found out for the most part I was standing alone. I had some powerful quotes that in the 24 hour life of the article were pulled and asked to be removed. They were accurate and complete in the moment, but they were also accurate from the position I heard them in. OR copied/pasted them from their written sources. So there was no other choice but to remove the article.

The voices say that people are generally happy with the way Placement handled the location of queer camps. The map that we posted and that was enhanced by a member of the community made it look like far less of a spreading than it seemed while out there: 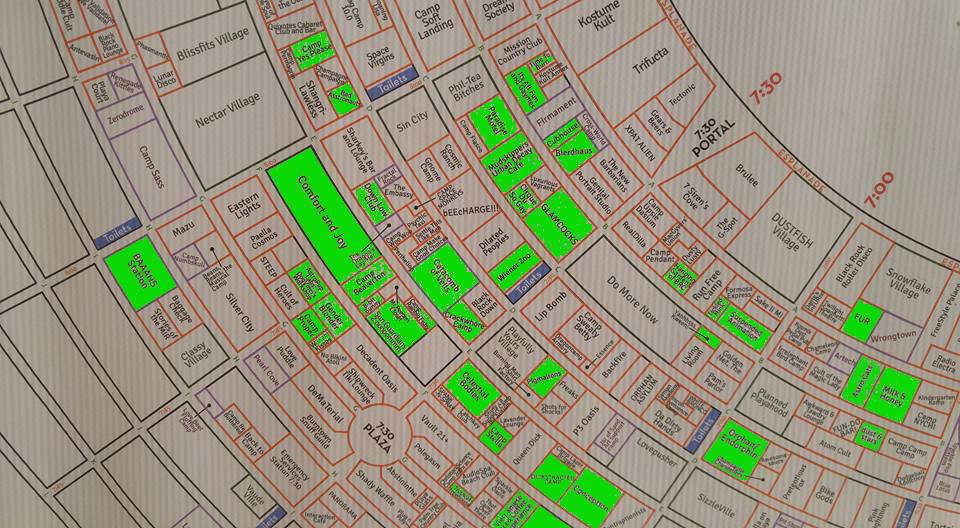 All we have is our integrity, and if I can maintain mine then I feel like I can hold my head up. I have always tried to do that in the community (Burning Man wide) and have often walked right into barriers that come from places that would shock people. This propensity to step into someone’s pile of shit has left me gob-smacked on more than one occasion.

There was a bit of a scandal over another camp and some EA passes. I asked a group of leaders in a private message about HOW we can help. The general consensus when all was said and done was there was nothing we could do. One of those campers shared that conversation with Placement; that person is known. Ironically, one of those leaders who was so adamant about the issue shared their EA passes with another camp leaving me completely stunned.

There was a meeting on playa Tuesday of burn week at the Sun Guardians village hosted by the Burning Man Theme Camp Organizer board that Placement attended. Having Answergirl and several placers there with more than 2 dozen camp leads was very important and appreciated.

There were a couple rotten tomatoes in the mix including Rich Martin who claimed to be a founding member of White Ocean and Opulent Temple. His rants against the Gayborhood and were paired with a member of the Temple Burn crew (name unknown) who railed hard about the existence of the Rainbow Road neighborhood. They had their reasons, and their voices are not unfamiliar, but they seemed to come to upset the table of the meeting that was not about the Rainbow Road. The meeting was about Placement and services for camp leaders.

It is powerful voices like these out of the 29.7% of the LGBTQ, Burning Man Black Rock City Citizens, that talk about the dissimulation of the Gayborhood. Is that where this is headed? Is that the future as it applies to Burning Man?

It is Queer Burners position, as part of the project, is to see the Gayborhood preserved. That Rainbow Road will be the future of the queer burner participants. If the future of Burning Man cannot see color, sexual orientation, sexual identity, or the other things that make us different than the other person then that will be a curious day. What I learned from Burners is that each of us who build and make want to be seen for our individual or group special-ness. All burners are peacocks.

Our integrity is everything. But someone told me this week that sometimes we simply need to be water, we need to flow with the current, and for some people the integrity of a peaceful solution is better than a battle against the current. If Queer Burners went away tomorrow and that was where it was supposed to go, if that was the flow, then that is the natural evolution of this project.

In the end, thanks for ALL the feedback. I encourage everyone to read back and see what was written by community members and share those feelings. Be honest. Be true.